Discover here the best of the south of Tenerife. Visit this Canarian island at the best price on the market with HD Hotels and enjoy the best plans!

The south of Tenerife is, without doubt, the most touristic area of the island. And no wonder. Obviously, the majority of tourists visit it because of its beaches, its enormous range of leisure activities, its famous nightlife or its first-class hotel facilities.

However, apart from its great offer of services there are also many other attractions for those who visit the southern half of the island on their holidays, such as enjoying themselves in a water or theme park, getting on a boat to watch whales...

Why travelling to the south of Tenerife

Tenerife is an ideal destination for all tastes. Here you'll find everything: nature, sport, beaches, culture, etc. And do you know what the best thing is? That it's located just a few hours by plane from the European continent so you can feel the sun's rays all year round.

Tenerife's climate is characterized by the softness of summer and the warmth of winter. But, above all, by the continuous presence of the sun throughout the year. Its temperatures 'dance' around 20 ºC, with a cool atmosphere due to the sea breeze and the trade winds.

The northern side of the island acts as a barrier, since when the sea of clouds collides with the Tenerife peaks, these protect the south of the island from the action of these clouds, guaranteeing a summer climate throughout the year, especially in the coastal areas where the sun always shines.

What to see in the south of Tenerife

The south of the island has many attractions to see, so we've selected three of the most important.

Los Gigantes Cliff in Tenerife is located within the Teno Rural Park and reaches, at certain points, up to 600 metres in height. The fact is that the almost straight fall of these vertical walls towards the sea gives vertigo even to those who don't suffer from it. On the sea bed you can contemplate the enormous natural richness, a paradise for diving and deep-sea fishing lovers.

Vilaflor, located next to the Teide National Park, is one of the highest villages in Spain. Surrounded by rural landscapes, it's a real haven of peace and tranquility away from the bustling tourist centres of the south of the island. Here you can enjoy its impressive natural, cultural and gastronomic heritage, where its famous wine stands out and cannot be missed.

Candelaria is a place where you can breathe a special air. This coastal town shows the religious impetus of Tenerife in all its splendour. The solemn basilica houses the image of the Virgin of Candelaria and is surrounded by imposing bronze Guanche statues. It's the meeting point for many pilgrims, who undertake long walks from all corners of Tenerife to honour her. 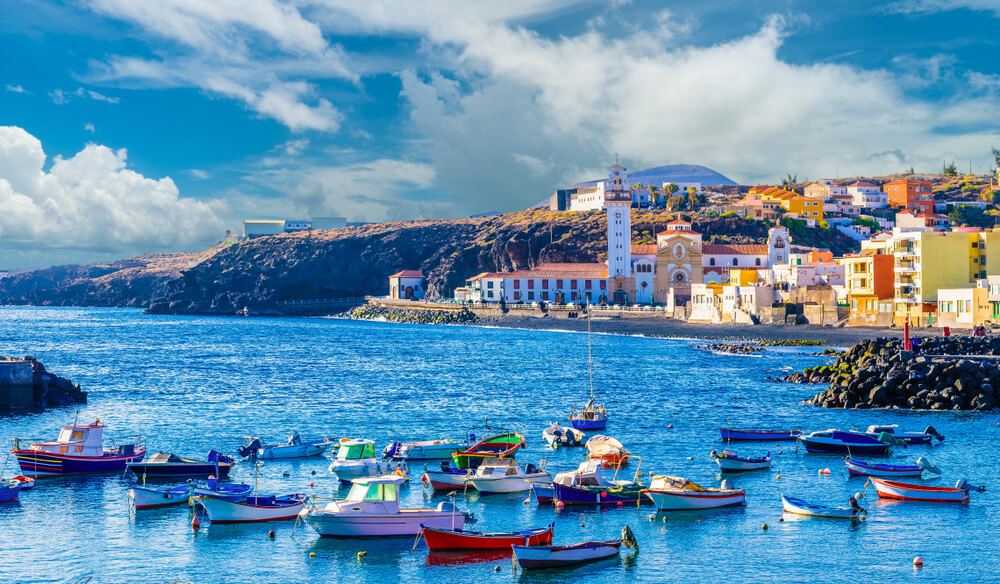 What to do in southern Tenerife

The south of the island offers many things to do, so we've selected three of the most important.

The south of Tenerife is one of the paradises where you can see all kinds of cetaceans: killer whales, rorquals, dolphins, blue whales... Every day boats leave to contemplate these beauties of the sea quite close, but without making them uncomfortable. Take your camera, put on some sunscreen and bring some warm clothes to enjoy a unique experience.

The Barranco del Infierno is home to one of the best known and most demanding hikes in Tenerife. It's a path at 350 metres above sea level that runs along a natural balcony offering impressive panoramic views of the landscape. Along the way you'll be able to discover many endemic species of Tenerife, both plants and animals.

Some of the best beaches in the south of the island of Tenerife are:

Which is the best hotel in the south of Tenerife

If we had to list all the accommodation on offer on the island, this article would probably be endless. However, we can recommend a place where you can disconnect 100% from the daily routine in one of the best family hotels in Tenerife.

Located in the south of the island in a calm environment, this accommodation has been awarded as the best family hotel in Spain in 2020 by the specialized tourism portal TripAdvisor.

And you, what are you waiting for to enjoy the south of Tenerife? You have no excuse not to come. We're waiting for you!