Discover here the best film locations in Las Palmas de Gran Canaria. This city is a destination that attracts cinematographic attention every year!

Gran Canaria and specifically its capital, Las Palmas, are attracting the attention of major film productions that see in their corners the perfect opportunity to carry out projects set in different settings.

This particularity shows the diversity of stages that can be found on the island, offering the most laureate Hollywood producers the possibility of working around volcanic landscapes, lush forests, paradisiacal beaches and a city with a unique style, where countless cultures can be found and its influence can be felt in its streets and neighborhoods.

But this is not the first time Gran Canaria has been on films, as one of the biggest film productions of the late 1950s and early 1960s, Moby Dick, was filmed on the capital coast of Gran Canaria.

Its director, John Huston, saw in the waters of the Atlantic the perfect setting to carry out the project that would launch to fame the great Gregory Peck, one of the most renowned actors in history.

Its high seas scenes were filmed in Las Canteras Beach, as the combination of natural accidents such as the waters of the archipelago, the currents and the Canarian coastline made it the perfect location.

This film, watched by millions of people, positioned the island as a stage to be considered for the recording of future projects.

The main features of Gran Canaria have made many Hollywood projects set their sights on landscapes such as:

In addition, several specific aspects of the island cover the demands and needs that film teams usually look for the perfect story.

In this article we are going to discover the hidden cinematographic locations in Las Palmas de Gran Canaria, some of them with a surprising flavour.

This city is full of impressive places found around its neighborhoods that attract the attention of most of its visitors.

Obviously, Hollywood producers also were looking for emblematic areas of a city that has coexisted with many cultures during the years, from the initial stages of the European conquest to the rise of tourism.

Thus, these are the most cinematographic places in Las Palmas de Gran Canaria, where many of the best actors have filmed. 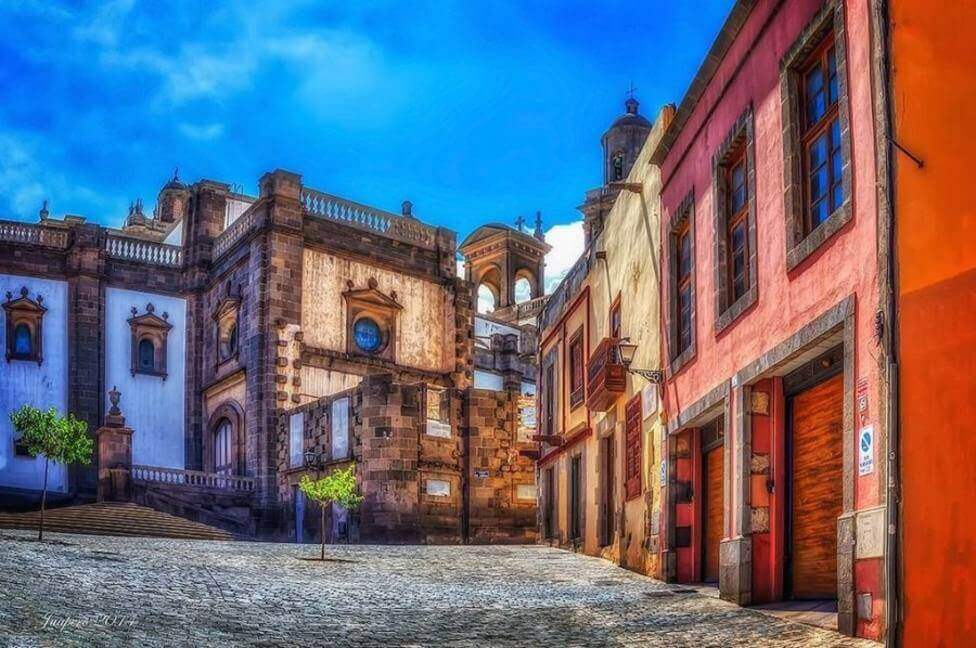 The city's old quarter, its stone cobblestone streets, its colonial houses and the preservation of past centuries' style with the utmost respect and affection, make it possible to shoot historical films.

Furthermore, local and regional institutions have made this neighbourhood more attractive to tourists who visit its most famous corners on a daily basis, such as the Calle de los Balcones, the Cathedral of Santa Ana or museums such as the Museo Canario or the Casa de Colón.

Next to Vegueta, the historical Gabinete Literario, where pedestrian streets converge, also preserves the colonial style. Plazas with many restaurants and bars that delight those who walk around its streets.

Films such as "Allied", with Brad Pitt and Marion Cotillard, were shot in this illustrious and beautiful area of Las Palmas de Gran Canaria.

One of the most important urban beaches in the world, Las Canteras, can be found in the city of Las Palmas de Gran Canaria.

This beautiful 4-kilometre long beach combines the island's natural diversity, so you can enjoy the its golden sand and calm, crystal-clear water in one area and the fierce dark sand in La Cícer, an area frequented by surf lovers.

One of the most historical places in Las Palmas with an easy access to all parts of the city by public transport and on foot.

A park that has been well preserved during all its existence and that has always been a neuralgic point of the capital's cultural movement, including the famous Carnival.

As we have seen, these corners of the capital of Gran Canaria have lots of diversity and versatility, the main characteristics that have led many Hollywood production companies to film future projects around here.

One of the best ways to enjoy Las Palmas de Gran Canaria is to stay in a hotel located near one of these points.

Our recommendation? The Acuario Lifestyle Hotel! This emblematic hotel is the best option for the quality of its services and location, right in Santa Catalina Park, from where you can visit all the places mentioned above and the whole range of activities and options offered by the city.

Discover yourself why Las Palmas and Gran Canaria is a city made for films and enjoy a different holiday full of experiences.