Discover here the best things to do in Las Palmas de Gran Canaria. This cosmopolitan city in the Canary Islands has plenty of attractions!

There is an infinity of things to do in Las Palmas, since it is a city that has seen its population increase considerably during the last decades.

This statistical increase has been noticed in business investments, many of them aimed at providing more variety to the wide and diverse leisure offer and to the cultural and natural attractions of the island of Gran Canaria.

Las Palmas is a multicultural capital full of activity, which is obvious as it is the most populated city in the Canary Islands.

Its mild climate with average annual temperatures of 20ºC allows you to enjoy any time of the year on its three main beaches: Las Canteras, Las Alcaravaneras and La Laja.

The history of this city spans more than five centuries. It was during the fifteenth century, precisely in 1478, when the Castilian captain Juan Rejón began the conquest of Gran Canaria by founding a military camp known as El Real de Las Palmas, in the historic district of Vegueta.

So, if you are passionate about city tourism breaks, you can enjoy a very special plan in winter, a trip to Las Palmas, a destination hardly known by tourists.

Things to do in Las Palmas

Colonial houses, castles, museums, beaches, shopping centres, the largest botanical garden in Spain... Perhaps when you read this you don't think of a Canarian city.

In fact, the capital of Gran Canaria has much more to offer than just going to the beach to sunbathe.

Get to know part of the history and culture of the Canary Islands, thanks to this neighbourhood that houses the Santa Ana Cathedral and various cultural proposals such as the Casa de Colón (a place where Columbus stayed during his voyages to the Americas) or the Museo Canario museum, one of the best museums in Las Palmas where you can take a more introspective look at the culture of the archipelago.

Crossing the Barranco de Guiniguada ravine, on the other side of the Carretera del Centro road, you will find the most emblematic street in Gran Canaria, the Calle Mayor de Triana, a pedestrian street that hosts shops, restaurants and bazaars with where you can enjoy a shopping day.

The Triana neighbourhood has one of the best theatres in Las Palmas, the Pérez Galdós Theatre, where you will be able to feel the traditional touch that this city has not renounced.

Probably, among the best things to do in Las Palmas is strolling and enjoying a sunny day on one of the best urban beaches in the world: Las Canteras Beach.

The beach is protected by La Barra, a natural barrier of volcanic rock that protects much of the beach from the waves.

Its promenade next to the sand will take you during its more than 3 km between restaurants, sun, live music... An authentic festival of sensations that ends in a surfing temple: the Cícer.

Here stands one of the most beautiful architectural monuments of the Canary Islands, the Alfredo Kraus Auditorium, which emulates a lighthouse and "watches over" everyone who walks along the beach.

This architectural wonder is an entire display of art that houses a wide range of leisure activities ranging from concerts, plays, film festivals... 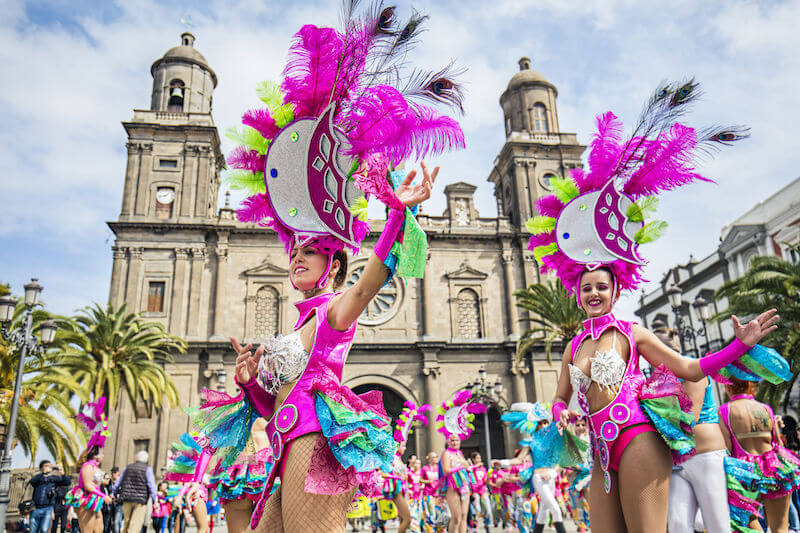 When someone had the great idea of uniting Carnival and Beach they probably thought of Gran Canaria, as it is quite difficult to find a place where the craziest parties on the calendar and the good weather are in such good harmony.

Without a doubt, the best things to do in Las Palmas in the middle of January and February is enjoying all kinds of colourful shows in the capital city. Murgas (bands of street musicians), comparsas (troupes), parades, mascaritas (people in disguise)...

Leave behind the shame and mingle with an endless number of people in fancy dresses and take part in the Grand Parade, the Burial of the Sardine, the Queen's Gala or the Drag Gala, the biggest carnival event.

In addition, Gran Canaria is one of the great centres of gay tourism in Europe thanks to its open and tolerant population and especially to this great show that attracts many international tourists who have transformed the city of Las Palmas as a gay friendly hot spot.

How to get to Las Palmas

The capital of Gran Canaria is located just 20 km from the Gran Canaria Airport (LPA), a journey that can be made in just 20 minutes along the GC-1 motorway. It is the fourth busiest Spanish airport with almost 5 million passengers per year.

It is also possible to reach the island by sea. From the Port of Las Palmas (popularly known as Puerto de La Luz) there are daily connections with the rest of the Canary Islands and with the Spanish mainland once a week.

If you are lucky, you will be able to contemplate some of the cruises in Gran Canaria. In recent years, the city has become an important base for tourist cruises continuing their journey from Europe to the Caribbean. Normally, the cruise season starts in October and ends in June.

Where to stay in Las Palmas

To make the most of things to do in Las Palmas, it is also necessary to stay in a unique and special place such as the emblematic Acuario Lifestyle Hotel located in the Santa Catalina Park between the Las Palmas cruise terminal and Las Canteras Beach being one of the best family hotels in Gran Canaria.