Back
LEISURE AND CULTURE IN LAS PALMAS
Interview
Gran Canaria

Discover here the best of culture in Las Palmas de Gran Canaria. The capital of the island has a wide and varied cultural and leisure agenda!

Culture in Las Palmas is in luck! The capital of Gran Canaria has a wide and varied cultural and leisure agenda: dance, concerts, opera, cinema, theatre or plastic arts, among others, are regular shows on the city's billboards.

It’s clear that with such a diverse offer the palmenses (as the inhabitants of Las Palmas are called) don’t have a passive attitude towards culture. On the contrary, they participate actively.

In addition to enjoying an incomparable climate, paradisiacal beaches or exuberant nature, you will find a great deal of traditions and cultural celebrations that have remained unchanged for hundreds of years in Las Palmas.

A side of the city where more and more visitors take part and discover a little more the Canarian character.

Participate in its popular festivities, get to know the fervor of its religious celebrations, move to the sound of its cultural dances or taste the typical products of each region.

In fact, the cultural richness of the island is not only found in its museums or exhibition halls, but also in its buildings and squares that have been enriched by the contribution of the different peoples who have left their mark on the island as they passed through it.

Best of culture in Las Palmas

Las Palmas de Gran Canaria is located in a strategic enclave, being historically a point where the cultures of three different continents have crossed: Europe, Africa and America.

The richness and cultural diversity that the city offers is the result of this emigration and fusion produced throughout the centuries. Thus, the cultural and leisure offer that Las Palmas offers to tourists is very wide.

Museums in Las Palmas are the "culprits" that its rich history isn’t kept under lock and key. In fact, thousands of ingredients are mixed in the wide network of museums of Gran Canaria, making the island's capital a meeting point for different cultures.

Without a doubt, one of the best ways to discover a town is by visiting its museums. Thus, its history can be known through artistic exhibitions. Luckily, Las Palmas de Gran Canaria has a wide range of museums. Among the best museums in Las Palmas we can mention the following:

An art gallery that houses most of the work of Néstor Martín-Fernández de la Torre, one of the most renowned Canarian painters and the main representative of modernism in the Canary Islands.

Another of the greatest pillars of culture in Las Palmas is this beautiful colonial-style building that offers thirteen exhibition halls dedicated to getting to know Canarian and American culture before the arrival of Europeans to the New World and to discover first-hand what life was like for these adventurers and their journeys by sea.

The CAAM is the contemporary art museum of reference in the Canary Islands, whose main peculiarity lies in its vocation to encompass the critical thinking and artistic culture of the three continents that have left their mark on the archipelago: Africa, America and Europe.

This impressive museum contains a great collection distributed in its eleven rooms on the history of the islands, focused on the archaeological discoveries that have been made over time.

This museum is dedicated to science and technology and is committed to interactivity, to understanding what is explained on its information panels through various experiments. The younger ones will have a great time, since... not to touching is forbidden!

As we see, it’s not surprising that the city has a great diversity of leisure options. Culture in Las Palmas is also reflected in its theatres, wonderful tools for establishing links and uniting its people at different times of life. Some of the best theatres in Las Palmas are:

The island's main theatrical sites stands in the capital's Triana district. It’s home to the Las Palmas de Gran Canaria Alfredo Kraus Opera Festival. It combines the romanticism of the 19th century with the advanced stage technologies of the 21st century.

One of the most important venues in the Canary Islands is this cultural space, which houses the most outstanding national billboards and international shows in all the disciplines of the performing arts each season. 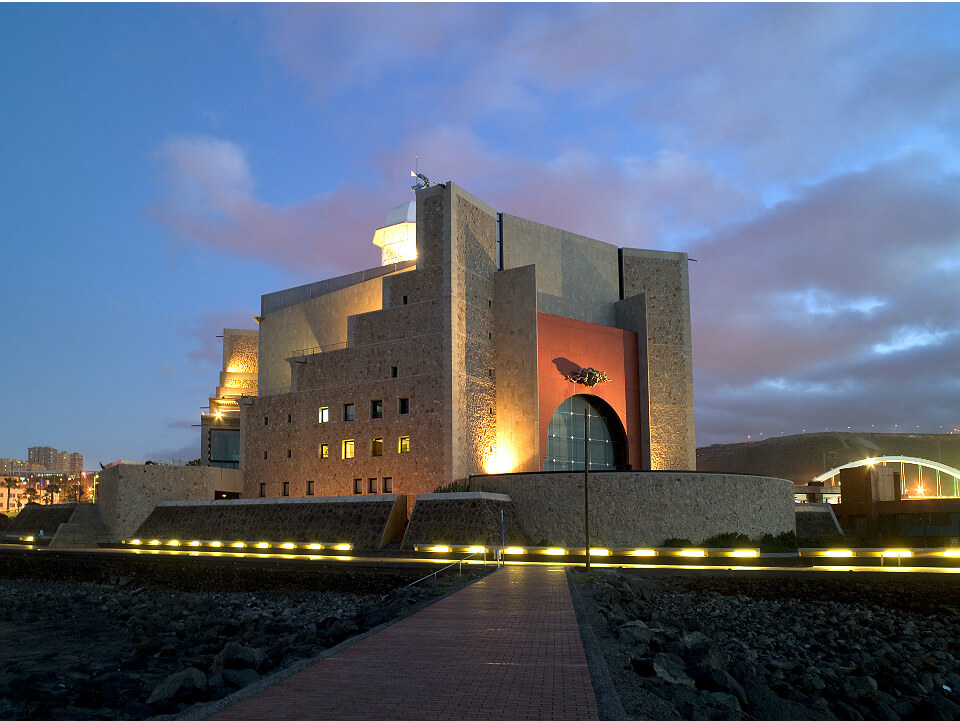 The Alfredo Kraus Auditorium bears the name of the most international tenor from the Canary Islands. It stands on a volcanic rock base in one of the most emblematic corners of the city, the famous Las Canteras Beach. It hosts plenty of plays, music concerts, humorous performances and even the Las Palmas de Gran Canaria International Film Festival.

This beautiful venue has a stable tribune for the exhibition of productions (mostly Canarian) so that residents and visitors have access to the best culture in Las Palmas thanks to a stable space of quality scenic programming, being the official headquarters for the projections of the Canarian Film Library.

This key place for cultural dynamism brings to the public and creators a regular programme, speeches and proposals that revolve around dance, literature, theatre, poetry, audiovisual, photography, plastic arts and popular and contemporary music. 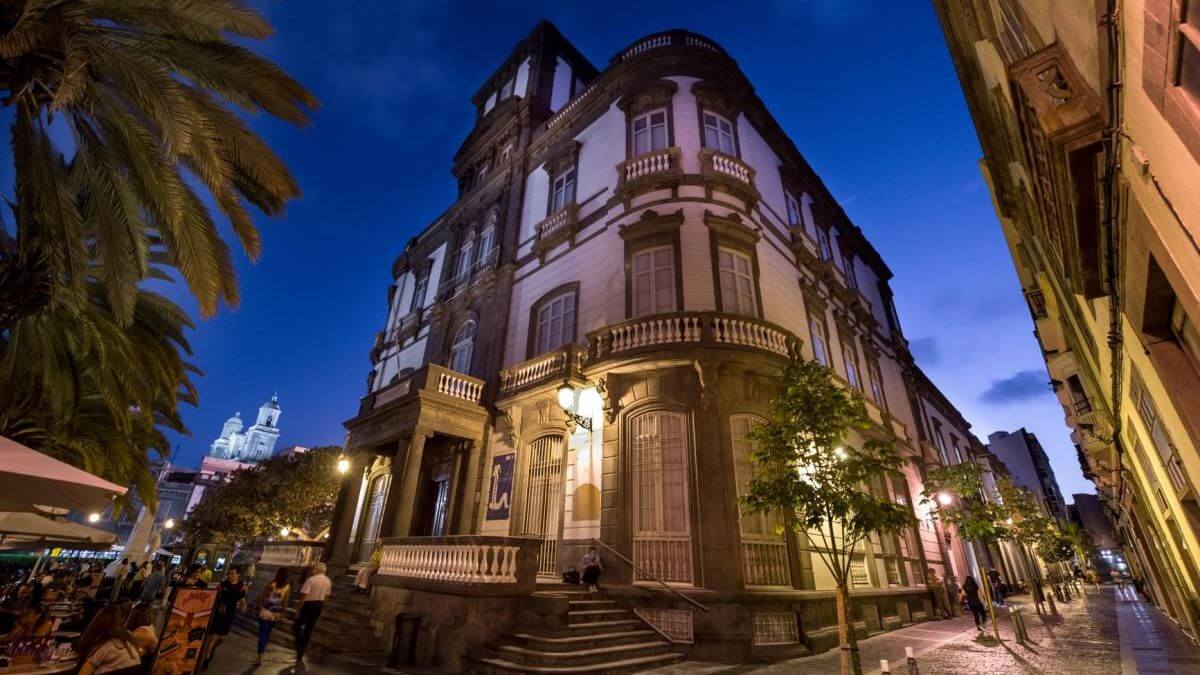 Libraries in Las Palmas de Gran Canaria are a common and heterogeneous space for citizens, as they provide their services free of charge, making easy the integration and coexistence of the entire community.

Its main objective is promoting reading habits in the population with the creation and development of new services and encouraging reading activities, avoiding that the economic or social circumstances as a barrier that prevents the access to the information, the formation and the culture.

Next, there are some of the city's best libraries:

In short, museums, theatres, shows, concerts, libraries and a very complete activities agenda are just a few examples of the incredible and extensive culture in Las Palmas. Stay at the Acuario Lifestyle Hotel and discover a city that doesn't just live from the sun and the beach.

To 25%
From 2 to 12 December children come free at HD Hotels.
Make the most of it and come and have a good time with them before the Christmas celebrations...
Sun, good weather, entertainment and all the fun they and you need.
* 1st child free - all other children pay only 50%.
To 30%
Are you sure you're going on holiday this year?
Do you like to have the best rooms in advance?
Do you want to pay less for your holiday?
Yes?
Well, YOU have an extra discount at HD Hotels, because booking in advance always has a prize on our website.
With our "Early Bird Offer" you will be able to get your holidays with up to 30% discount for the whole year.
What are you waiting for to be one of our "early birds"?
Check what discount you can accumulate in each of our hotels.
Keep reading...